The news out the last few days about the militia movement is very troubling. Some people fear the possibility of a second civil war with all the gun toting crazies that are going around. On the one hand, this is an old, long-ignored problem.  Back in the 1990s, the militia movement at times appeared even more advanced and likely to spur ever more examples of shootouts like Ruby Ridge and Waco. But it does also seem different now, given the encouragement to the lunatic fringe by some Republican so-called leaders and the addition of an ideological fanaticism like Q-Anon.  It should be an early priority to suffocate this militia movement. There is no God-given or Constitutional right to tote around military-like weaponry around polling places or government buildings. The fact that some police officials now at the sheriff level are actually embracing this type of behavior should be seen as very worrying as well, and to my mind should be looked at as grounds for discharge.

I am worried that the progressives and moderates have been pussy footing around on this issue of guns, and ever yielding or failing to stop the illegal creation of so-called militias, in such a way as to simply kick the can down the road and cause the problem and polarization to grow and grow. It’s time to engage in a very explicit dialogue and open discussion about what are legitimate and what are not legitimate Second Amendment rights.  Failing to do so simply balloons the potential danger this country will face in the near term. 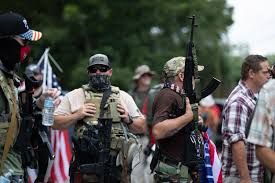